“The Flyover”: One Woman’s Journey to Visit All 50 States! 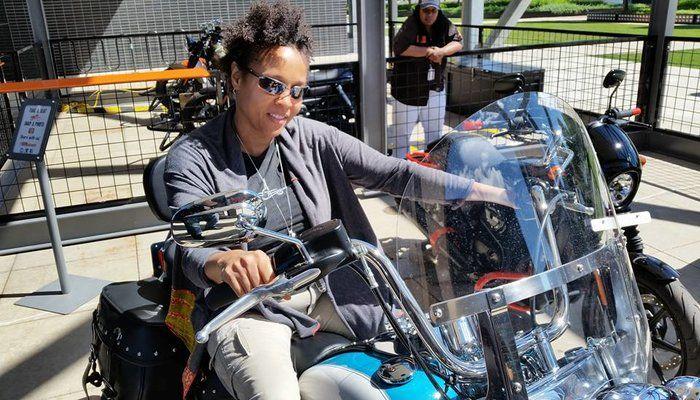 Dr. Dina Strachan in Milwaukee. My first time on a Harley, at the Harley Davidson Museum. If this could move I’d, of course, wear a helmet. Perhaps my midlife-crisis car won’t be a car.

While I am traveling in Thailand I have a fantastic guest post from one of my medical colleagues! Dr. Dina D. Strachan is sharing with us her quest to visit all 50 states!

“How many states have I visited?”

I don’t know what inspired the question as I relaxed on my couch that night. Was it all the growing hoopla around the impending presidential election?  How interesting it would be to really get to know a country, visiting every state, the way I assumed a presidential candidate did.

I’m a native New Yorker—but I’ve lived and travelled many places both nationally and internationally. Wanderlust was part of my experience since I was a young child who was mostly restricted to the borders of the city block she lived on.  Much like Tomas, the protagonist in The Unbearable Lightness of Being, who had a disdain for things kitsch, I had a disdain for being provincial.  Why would one not want to explore, experience and understand the world—warts and all.  It had always been important to me to not just be a tourist, with a checklist of popular sites to see, but to be a traveler, who was open to getting to know a place deeply and authentically.  As a student, I was always on the hunt for an interesting international experiences be it living in an ashram in India or studying endangered monkeys while camping in a tent in the Panamanian rainforest.  After many years of globe-trotting however, I realized I didn’t really know the United States, my home—a country the size of a continent.  I had seen the deserts of Rajasthan, but I had not been to California. Despite being a jetsetter, I realized my perception of America was also a provincial one.

Luckily, my career in medicine gave me many opportunities to explore this country be it for education, training, conferences, and visiting all the many friends made along the way. By the time I was sitting on my couch last spring, trying to recall where I had been, I had not only been to California, I had lived there for over 6 years, and had been to many states.  When my tally was done, I came to realize that a mere 16 states were keeping me out of the 50-state club.  These included North Dakota, South Dakota, Wisconsin, Iowa, Nebraska, Kansas, Oklahoma, Arkansas, Mississippi, Montana, Idaho, Wyoming, Utah, Arizona, Kentucky and Alaska.

I pulled up a map on the internet. Immediately, I started to strategize as to how I could travel to all of these states, perhaps that coming summer.  When I mapped out what territory I had to cover, I was excited to see that except for Alaska, I could visit all of the states by driving.  I considered taking a week, flying to North Dakota and driving south to Mississippi—it would only be 24 hours of driving time according to Google maps.  As I sat there exploring different itineraries, the thought had come to me, “wow.  I’m provincial—coastal provincial.”

It was during my sojourn in California that I had been introduced to the term “flyover states.” This was a reference to the Midwestern and Mountain states.  These were the states that we coastal jetsetters flew over on our way from New York to Los Angeles.  The sentiment is that there is nothing interesting in this area to stop and see.  I both chucked and cringed when someone used this term. But there was no denying, looking at my travel history, that I had been a coastal snob. I had been provincial.  I, too, had treated this area as a “flyover” territory.

I started to look at this adventure differently. I hadn’t visited the other states to just check them off of my list.  During my life I had found valuable reasons to take time and money to go to these places.  I had been to the Isle of Man—might there also be something interesting in Nebraska?  An iconic landmark?  Nature?  A different pace of life?

As I explored what I could experience as I planned this adventure, I encountered pictures of Badland National Park in South Dakota, which changed everything. I wanted to experience the feeling of standing in a place surrounded by such otherworldly beauty.  I was humbled to find that and more awaited me on the less travelled roads of the “flyover” states.

This past July 4th weekend, I began a series of trips that I have named, “The flyover” that I intend to complete by the end of July 2017 with a final trip to Alaska.  The rules are that even if I don’t spend the night in a particular state, I must visit some place iconic, a unique local landscape, or experience some kind of local immersion—even if it were a bit kitsch (sorry, Tomas).  Here are some highlights:

I was initially stumped as to what I would go and see in Wisconsin—until I read about the Harley Davidson Museum in Milwaukee. It was humbling to learn that this iconic American brand, which had an international cult following, was a product of this Midwestern city I had never before considered going to.  At the museum, there were displays of models dating back over a century.  It was interesting to learn that a motorcycling was originally considered a gentleman’s sport and that only around the mid 20th century did it become more regarded as part of a rebel lifestyle.  Of course, before one enters the museum there is an opportunity to mount (and take pictures) on a few different models –to engage one’s inner badass.

Other than visiting the museum, I didn’t have any specific plans before I drove off to my next state. Luckily on my early morning flight from New York I struck up a conversation with the man seated next to me. He was a banker who he had grown up in Wisconsin.  He was amused at my “flyover” tour.  I asked him if there were some local foods that I could try that were unique to Wisconsin. He recommended that I visit Madison, the state capitol, for lunch, and that I try cheese curds and a pastry called kringle.

I left the thoughts of two-wheelers and the wind in my hair behind me in Milwaukee, hopped in my rental car, and headed to Graze, a beautiful locavore restaurant across the street from the state capital building. It was there that I experienced Fried Hook’s Cheese Curds with ranch dressing.  It was some of the best cheddar cheese I had ever tasted—but I was confused.  This cheese was different than the Wisconsin cheddar I had had before.  I asked the waiter why.  He explained that the cheese they served at Graze was so fresh that it sometimes had never been refrigerated.

Before leaving Madison I was able to pick up some kringle at Lanes, a local bakery. Kringle is essentially a big Danish ring.  The rings are huge and are definitely meant to be shared.  The more traditional version contains raisins and nuts but Lanes carried a variety of flavors including cherry and cappuccino.  I got one to try with my friends I would be visiting, and shipped some back to my office staff and home.  I was told it would keep unrefrigerated for a week—and it did.  Kringle was a hit.

Visiting Iowa gave me the opportunity to catch up with friends—both doctors. One was from medical school and had moved there with her family a few years prior.  One was a mentee of mine who was just starting out in her training.  Rather than run around to tourist sites, I just immersed myself in her routine for a couple of days.

What I found most beautiful about my trip to Iowa was something I did not capture in a photograph. It was the flatness and the wide open sky that surrounded me. It was if I were in a snow globe, as I drove through the farmland.  Coming from a place where a building often obstructed the view, it was amazing to see endless panoramic cloud shows as I cruised on empty roads past farms and cornfields.

In the small city where my friend lives, Davenport, I was struck by the lower population density on the streets.  Unlike in Manhattan, people let their hair go gray.  I didn’t partake in the usual tourist attractions in Iowa but instead got a small taste of a slower pace of life, the connection to the land, and the lower population density that can give one an opportunity to be with one’s own thoughts.

Miles of ranch land and open views in South Dakota. 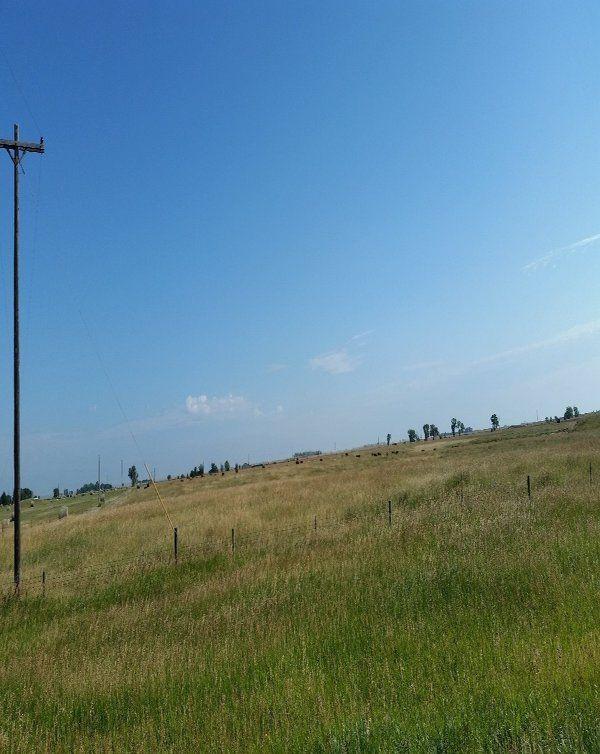 The landscape transitioned from farms, to wider spaces and ranches as I entered South Dakota. Before I had researched this trip, South Dakota was a state I would technically visit by driving through.  It turned out to be a place with so many reasons to stop.  This leg of the trip was about getting something I could not get in Manhattan—amazing National Parks.  In fact, it felt apropos that 2016 was the centennial of the National Park Service started by Theodore Roosevelt.

Of course, the first stop was The Badlands National Park. This region was named “The Badlands” by french explorers referring to it being difficult terrain to cross.  Although rugged, The Badlands were a humbling example of the earth’s magestic, forboding beauty.

A short ride from The Badlands, Rapid City, SD served as basecamp for the rest of the trip. Although perhaps most famous as being near the famous presidential monument, Mt. Rushmore, Rapid City is known as “The Presidential City” for another reason.  Scattered through the downtown are true-to-life size bronze statues of every former president posed in a manner inspired by their personalities.

Near Mt. Rushmore and Rapid City nestled in the Black Hills, who was another monument to an American leader, the fierce Dakota leader, Crazy Horse.  The Crazy Horse Memorial has been under construction for over 60 years– mostly the passion project of one family over multiple generations.  This sculpture in the wilderness is the largest monument in the world.  bigger than the pyramids and the sphinx.

Nearby, another beautiful national park, could be is described as “where the buffalo roam.” Herds of buffalo, prairie dogs, deer-like creatures called two-prongs roam on the roads with the cars, and motorcycles.

Although I still have a few states to go before I can complete all 50, I am proud that I have expanded my comfort zone as to where I can find interesting experiences and people when I travel. Sometimes places we just fly over have a lot to offer.  We should stop and take a look.