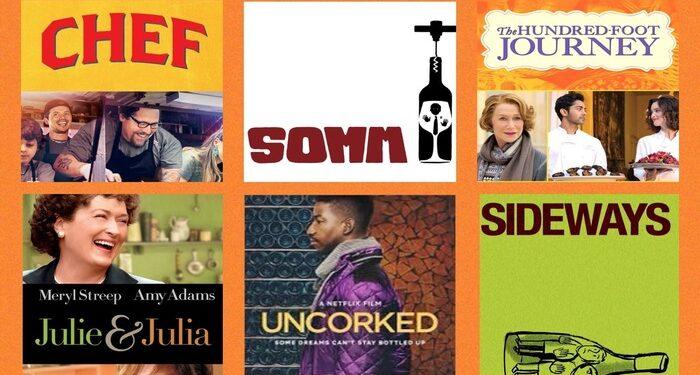 As most of you know, I love to travel. Two of the things I love most about traveling is experiencing good food & great wine. When I can’t travel, I enjoy watching food & wine movies. Food & wine movies tell great tales about the culture of a destination. I prefer fictional movies but documentaries can give you same experience and are very educational.

If you love food & wine as much as I do, here is a list of food & wine movies to binge watch when you are shut in.

1. Chef: This is absolutely one of my favorite movies. Starring Jon Favreau, John Leguizamo and Sofia Vergara. Chef is a touching story about a man’s passion for food as well as his relationship with his young son.

2. The Hundred-Foot Journey: The clash of two cultures come together in this film. An Indian family moves to a quaint French Village and opens up a restaurant. Helen Mirren’s character owns a posh French restaurant next door and is not pleased about this. But, one of the family members becomes her protégé. This film is full of love and laughter. It reminds us that no dream is too great if you are willing to work to achieve it.

4. Eat Pray Love: Admittedly I am a fan of Julia Roberts and Javier Bardem who both star in this movie. It is based on the best-welling novel by Elizabeth Gilbert. In the movie Julia spends the “Eat” portion of her trip in Italy. Imagine eating as much pizza and pasta as your heart desires. The food scenes will leave you drooling. Based on this film I planned my own Eat Pray Love solo trip to Northern California in 2011. It was an amazing experience.

6. Chocolat: This is another classic filmed 20 years ago in 2000. It is set in France and stars Juliette Binoche and Johnny Depp. Juliette’s character opens up a chocolate shop in town and stirs things up (so to speak).

7. No Reservations: This is one of my favorites. No Reservations stars Catherine Zeta-Jones, Aaron Eckhart and Abigail Breslin. This movie teaches you about priorities, competition, letting your guard down and about love.

8. Burnt: Although I am a fan of Bradley Cooper, I have not seen this movie. I couldn’t picture him as a Chef. (lol)  But I plan to watch it. After being a top chef, battling a drug and alcohol addiction, he is attempting to earn his third Michelin star.

9. Jiro Dreams of Sushi: This is a documentary based on famed sushi Chef Jiro Ono. He is known for innovating ways of making sushi. Jiro Ono was 85 years old when this documentary was filmed and is now 94! He is the owner of Sukiyabashi Jiro in Tokyo Japan.

10. Big Night: This movie stars and is directed by Stanley Tucci. Tony Shalhoub and Stanley Tucci play immigrant Italian brothers in the movie. They open a restaurant in New Jersey and struggle for success. I love both of these actors so I can’t wait to watch it.

11. Eat Drink Man Woman: I am not sure how I missed this one when it came out since I am a big fan of the director-Ang Lee. It is based on a family in Taiwan who get together once a week to share a meal. Taiwan has been moving up my travel list based on the food.

Food Movies for the Family:

12. Cloudy with a Chance of Meatballs: I have not seen this movie but it sounds entertaining. An inventor builds a machine that can change water into food. Tasty treats literally fall from the sky. But, this backfires when the town is being buried under meatballs.

13. Ratatouille: The main character Remy is a rat who dreams of becoming a Chef. He moves to Paris to pursue his dream.

14. Uncorked: I absolutely loved this movie. It tells the story of a young man who has a passion for wine and pursues his dream of becoming a master sommelier. But his father has been grooming him to take over the family BBQ business in Memphis TN. He does not understand or support his son’s dream. It was written, directed and produced by Prentice Penny of “Insecure” on HBO and it stars Courtney B. Vance, Niecy Nash and Mamoudou Athie as the main character. Check it out on Netflix.

15-17. SOMM, SOMM: Into the Bottle, SOMM III: If you are into the history of wine, wine making and learning how to become a sommelier then these 3 documentaries are for you. You can watch them on Amazon Prime or on SOMMTV. SOMMTV is from the creators of the SOMM documentaries. Programs cover food, wine and hospitality.

18. Sideways: This is absolutely one of my favorite movies. Two guys set out on an adventure to Santa Barbara wine country before one gets married. It stars Paul Giamatti, Thomas Haden Church, Sandra Oh and Virginia Madsen. Paul Giamatti’s character in the movie famously says, “I am not drinking any F*** Merlot” (lol). This movie actually resulted in a drop in sales of Merlot wine.  I was learning more and more about wine around the time it came out in 2004. I even made a decision to visit the Santa Barbara wine country which I did a few years ago.

19. Back to Burgundy: This is a dramedy set in Burgundy France. A prodigal son returns home when his father becomes ill. He reunites and tries to rebuild his family relationships.

21. Bottle Shock: This film stars one of my favorite actors that is no longer with us-Alan Rickman. Alan Rickman plays real life wine expert Steven Spurrier. In 1976 he organized the Paris wine tasting. It was an epic blind tasting of French and California wines. The movie focuses on the character searching for Napa Valley wines to be used for the tasting.

22. Decanted: Decanted is a documentary on Napa Valley winemakers. Maybe one day I will be one of them.

23. Wine Country: This 2019 comedy has an all-star cast. You will recognize SNL alums of Tiny Fey, Amy Poehler, Rachel Dratch and Ana Gasteyer. Girlfriends take a trip to Napa Valley to celebrate a 50th Birthday and mayhem ensues.

24. A Good Year: This is a romantic comedy starring Russell Crowe and Marion Cotillard. Russell’s character inherits his uncle’s vineyard in Provence, France. However, he finds out his cousin may be the rightful owner.

25. Red Obsession: A documentary about the wine business in Bordeaux France. I visited Bordeaux in 2019 so I can’t wait to watch this one. Stay tuned to the blog for a detailed Beginner’s Guide for visiting Bordeaux.

I hope you have enjoyed this list of 25 delicious food & wine movies to binge watch! Did your favorite make the list? Feel free to PIN this post for future reference!

17 Self-Care Ideas To Do During Self-Quarantine.